Last summer, I volunteered to be a subject in some BCI (Brain-Computer Interface) research. Hinrik, an MSc student I also used to go out and get drunk with (and try to avoid fighting with squaddies, but that's another story) was doing a project on robot control via EEG. He fitted lots of electrodes on my head, and I had to think of moving (without moving) while watching a robot move. This is what I looked like: 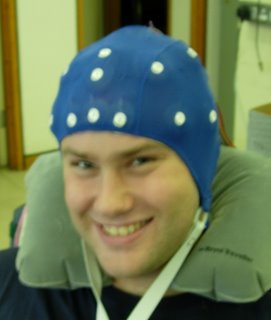 BCI is definitely an interesting field, and the BCI group here at Essex seems to contest of thoroughly nice (and competent!) people. I wouldn't mind being more involved in such research...
...but no, I have enough to do as it is. And I'm quite happy with what I do.
Posted by Julian Togelius at 9:22 PM